Hey everyone, so it's that time of year again...SPOILER SEASON! We decided instead of doing reviews piece by piece this time we would do a big article about all of them. So with out further delay here is our thoughts on the newest set at first glance.
Lolzor had to leave mid way through but Baalhrezem handled it on his own. Leave comments with your own thoughts we'd love some discussion


(Video lost forever because we messed up.)

Watch live video from SnowCoveredSwamp on TwitchTV
Posted by Lolzor at 7:52 PM No comments:

Bomber is going to need an extended vacation:

Here's a stream highlight from us playing Hearthstone. Mad Bomber is kind of a pet card for Lolzor and I, and he proves how valueable he is this game. Click the video below to watch him in action:

(may require an ad to be played)

Watch live video from SnowCoveredSwamp on TwitchTV
Posted by Sefah at 10:55 AM No comments:

Kiora Atua - 2GU
Planeswalker - Kiora
+1 :: Until your next turn, prevent all damage that would be dealt to and dealt by target permanent an opponent controls.
-1 :: Draw a card. You may play an additional land this turn.
-5 :: You get an emblem with "At the beginning of your end step put a 9/9 blue Kraken onto the battlefield."
// 2

Alright so maybe it's just me, but I am absolutely fed up with all the new planeswalker's mechanics. So far everything has been:

What happened to interesting planeswalkers like Sarkhan, the Mad? Maybe I'm overreacting, but the biggest planeswalker offenders always seem to be the emblem creators. And not in the way the game is played, it's the creation of the card seems to have no reason. I'm sure there's more to this than I think but I just wanted to get my feelings out there.

As for discussion for the card itself, I'll leave that yo Lolzor when he gets a chance.

Also something something about raising $175 for Child's Play Charity in our Megaman X marathon.
Posted by Sefah at 6:07 AM No comments: 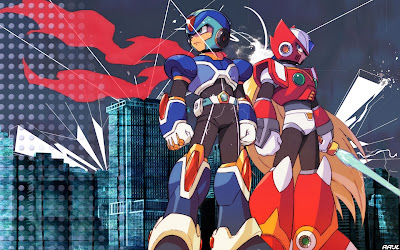 Hey guys this will be our official post for the event. Our donation button is below and the official start time is 5pm EST. All the rules and objectives are here at our facebook event page https://www.facebook.com/events/330023673802962/?source=1


I hope you are all excited like us I will keep updating this page as the event goes on as well as on our twitter: @SnoCoveredSwamp. Obviously the stream is at www.twitch.tv/snowcoveredswamp.
See you guys tommorow! 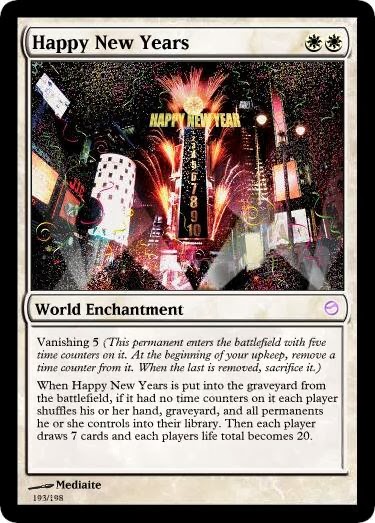 Happy New Years - WW
World Enchantment
Vanishing 5
When Happy New Years is put into the graveyard from the battlefield, if it had no time counters on it each player shuffles his or her hand, graveyard, and all permanents he or she controls into their library. Then each player draws 7 cards and each players life total becomes 20.


Continuing the trend of World Enchantment Holidays...IT'S THE NEW YEAR.

Happy New Year everyone this card is obviously simulating the ball drop and eventually fresh start of a new year. It actually seems very fun to put in a deck...I don't know if there is a broken aspect to it...but its hilarious to think about just setting a clock on your opponent.

Anyway we hope you had a great year and have a better one this year. We have lots of stuff planned for our site and we hope you will  stick around as we grow.