Samite Alchemist - 3W
Creature - Human Cleric
{W}{W}, {T}: Prevent the next 4 damage that would be dealt this turn to target creature you control. Tap that creature. It doesn't untap during your next untap step.
0/2


I figure I had to make a post for something signifying we made 10,000 views here on SCS. Somewhat of an achievement for us--and I'm sorry we didn't have cards this week for MUCMonday.

As for this card, it reminds me of one of my older favorite cards: Hallowed Healer. Particularly expensive with it's activation cost, though less effective than a consistent 2 with potential 4 without any costs and it comes with the fact you can't prevent damage to players.

It's an interesting card but I don't really see it used outside of Limited, at all. It just weighs down your mana.

YAAAARRRRR HAAARRRRRRR....ahh fuck it I'm too tired and my voice hurts. Sorry for the late comic, we had just a short delay and I worked and such but I think I made it just before the midnight mark.

But...Its the conclusion of the wellwisher comic! YAYAYAYYAYAYAYAYYAY! the first one was called wish granted....but fuck you I didnt notice...YOU LIKE ON TIME COMICS RIGHT??? Thats what I thought...ok time to end this article I'm getting belligerent. (ps it was talk like a pirate day...hence the intro. I love you all).

Relevant cards!
Lightning bolt
Consume the Meek
and everything from last comic

See you next time!
Posted by Lolzor at 8:53 PM No comments:

But as a note before you read the cards

We were really lazy in making names. 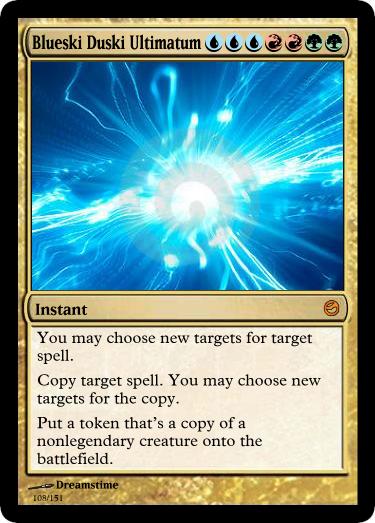 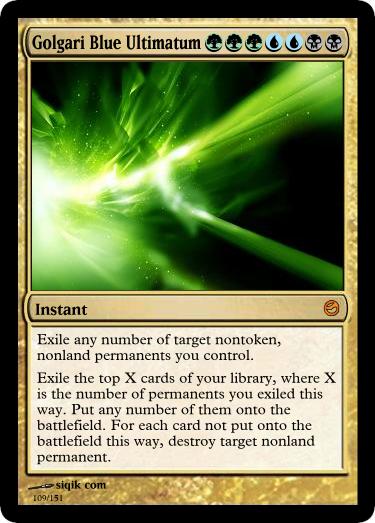 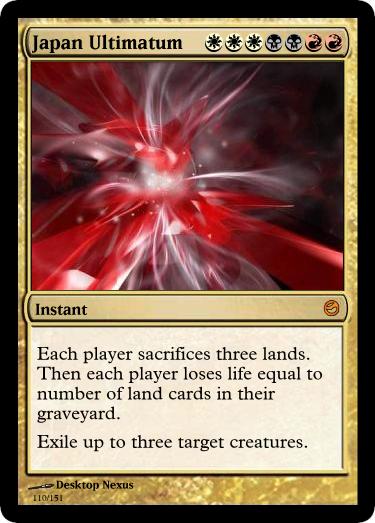 Japan Ultimatum - WWWBBRR
Instant
Each player sacrifices three lands. Then each player loses life equal to number of land cards in their graveyard.
Exile up to three target creatures. 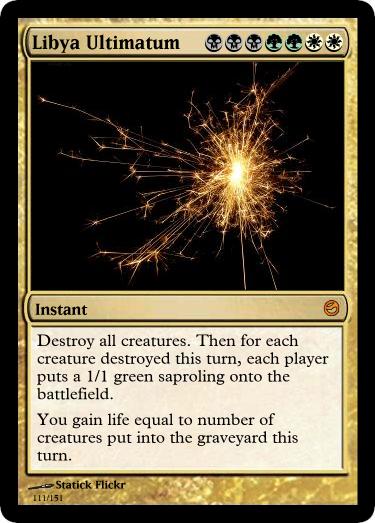 Libray Ultimatum - BBBGGWW
Instant
Destroy all creatures. Then for each creature destroyed this turn, each player puts a 1/1 green saproling onto the battlefield.
You gain life equal to number of creatures put into the graveyard this turn. 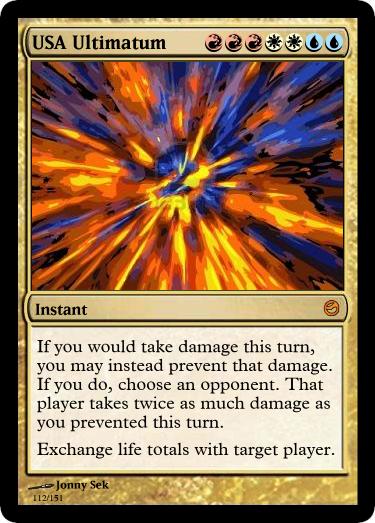 USA Ultimatum - RRRWWUU
Instant
If you would take damage this turn, you may instead prevent that damage. If you do, choose an opponent. That player takes twice as much damage as you prevented this turn.
Exchange life totals with target player.
Posted by Sefah at 10:11 PM No comments:

What we think RtR is pushing:

At this point I'm just doing acronym thing to piss Lolzor off. So this week we are going to talk about what meta's exist, and what meta's they are trying to be pushing for.

Obviously there are one of every color and probably an artifact shift for each of these, but in general. I missed a whole bunch but let's take a look at all of these.

Ravnica is known for the two-color guilds. Each one obviously has their own flavor.

Ever since Innistrad, Wizards has been pushing for an aggro meta--as evident by the removal (non-reprinting) of Mana Leak and Day of Judgement. Monored Burn is always thrown a bone every set so it's never particularly amazing in standard. The closest that they had last time was with Lightning Bolt in Standard. It's not a particular one that is fun to play again, since your success with the deck largely determined by your opening hand.

Monoblue is largely the opposite. (Go figure, red and blue are enemies.) It encourages stalemates and dragging out to the long game. Low cost defensive spells and high cost win spells. Obviously best supported with Black or White, the two allied colors of blue. Once again, wizards doesn't encourage this style of play, but blue is always thrown a bone every set. They'd like to prevent another Mind Sculptor.

Monogreen and monowhite are the most "encouraged" by wizards. Any Timmy loves this too. Big dudes or lot's of moderate soldier dudes swinging at you. Somewhat looked down upon by more experienced players as it's strategy is very straightforward. Draw swing cast. Oldest strategy and still surprisingly effective.

Although since Innistrad, G/W Tokens has made some shows. Maybe not as much as Delver of Secrets but still seen. With the new mechanic Populate, we might see more of these played. At least until one particular deck begins to dominate.

Red-blue counterburn. A personal favorite of mine. This is not really a deck, but it somehow gets revived every once in a while--creating it's own Archetype. Way back when there was Kiln Fiend. It wasn't called RU Counterburn. It was called Kiln Fiend, because that card was insane. Since Delver and Snapcaster came out, it also has seen a lot of play. It's not a particular archetype as mentioned earlier but it combines highly efficient cards with direct-to-the-dome damage. I don't know the cards in particular, but I know Lolzor mentioned some spoilers of very efficient "counterburn" cards. Also with the return of the Izzet guild, we are definitely going to see this be more prevalent.

Golgari. Lolzor's personal favorite. Once again, not really a deck and more of something that makes its own archetype. Returning with Golgari guild in Ravnica. We might see more, but I know not as much information on this as Lolzor.

Me and Lolzor didn't really talk a lot last night but this was the basic gyst of we wanted to say. It's a bit rushed and not as thought as we liked, but we hope you enjoy it.
Posted by Sefah at 5:27 PM No comments:

New planeswalker. G/B. And she looks fucking awesome.
In my opinion she is the first true pw of those colors (Garruk was cool and all but more the flavor of the set than the colors).
For those who don't know I'm a heavy jund player, and I started play in green black. So obviously I was super excited to hear about a planeswalker...excited but hesitant. Usually golgari things end up being over costed or under powered in my opinion. She seems for sure playable and strong in a few formats.

Let's review her shall we?

Cost- 3GB
ok so 5 cost, kinda mana intensive...a bit more than your average planeswalker but over all not a deterrent. (no like Nicol Bolas price)

First ability  +1
Ok so I really like this ability its a plus 1 so its a standard growth and its insane self protection you an just ping away at her, you cant full swing at her, and if you send ur bigger guy he is gone. You basically profit no matter what.

Second ability -3
Simple and effective. higher than a normal cost but its an intense ability to have on repeat. good utility something that truly appeals to me

Final -7
Annnnndddddd a solid final move. 3 1/1's that instant win...pretty insane. Yea they are squish and vunerable but high risk high reward could be killer (HAHA GET IT?) in edh. Very in color and not too expensive for a 3rd ability.

She isnt broken, she isnt terrible. She is a good pw.

Coming in at 5 counters is nice, repeatable spot removal is good, her plus one is nice if not only a little meh because it only saves her. her final is definatly worth its cost but does have to be set up a bit.
Nothing ground breaking but i think very good and may be seeing some play depending on the rest of the set.


Im sure Sefah will come in and tell me how wrong I am but too bad!


(this may be a little awkwardly formatted and typoy cuz im writing this on my phone...at work...at 8 in the morning...but I hope little shit like this can make up a bit for the lack of content as of late)
Posted by Lolzor at 5:53 PM No comments:

Bangchuckers bro?
This week we have me and bit's 3 year addiction League of Legends! The comic derives from a superstitious I have about one of the skins you can purchase for a character in the game. I lose every game against it...


Related Cards:
...too lazy to think

also I've started hosting the comic over at http://bangchuckers.thecomicseries.com/ in addition to here...should improve the quality of the pics over here at SCS. Yay!
Posted by Lolzor at 7:40 PM No comments: 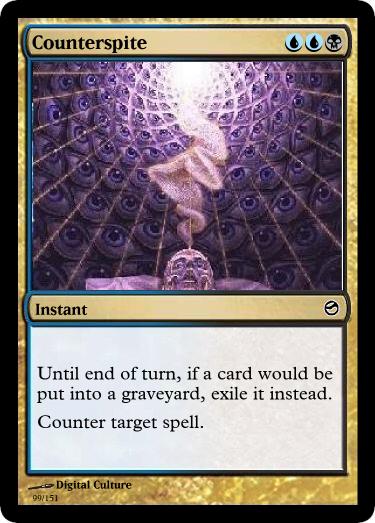 Counterspite - UUB
Instant
Until end of turn, if a card would be put into a graveyard, exile it instead.
Counter target spell.

An interesting card. Kind of like Dissipate only it lasts the whole turn. 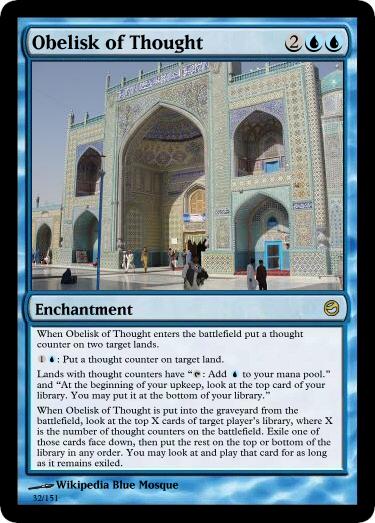 So many words, you just have to read it. 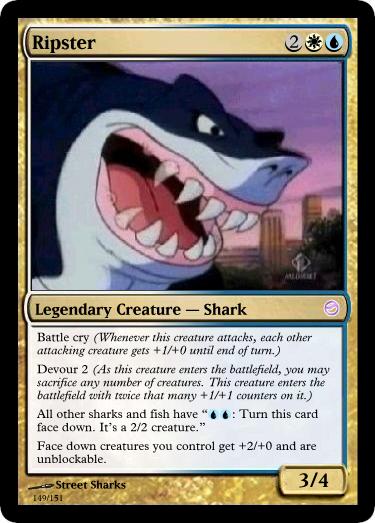 A silly card the Bitlo was supposed to make entire cycle out of. But he's off doing other things and this is the only one he did. Enjoy.

Well that's all the cards we're showing this week, come back next week for more cards.
Posted by Sefah at 7:41 PM No comments: