Alright so let's preface with this was supposedly Lolzor's big article that he was super excited to talk about, but really it's Sefah here going to do some spoilers on random cards I pick out.

Alright let's see what we get. 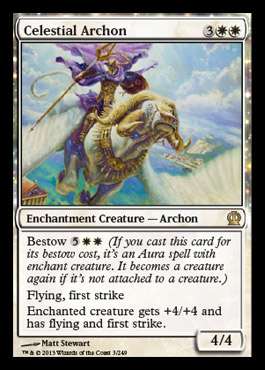 Well this seems like a nifty card. Maybe not the card itself but that mechanic is very interesting. Seeing as the only previous Enchantment creature was Lucent Liminid. Now it should be known that an Enchantment creature is no different than an artifact creature. It can still be Naturalized and stuff.

Alright, a 5-cost 4/4 flier with first strike is pretty good. It's no Baneslayer Angel, but it has this really nifty effect that for 7 mana it can be an aura. Now I don't know if you read my previous article about how much I hate aura enchantments due to how easy it is to get 2-for-1'd, (exceptions: Rancor, Angelic Destiny) but this keyword mechanic kind of circumvents that a little.

For a huge mana cost of 7 mana, it becomes an enchantment. Then if the creature dies, the enchantment falls off and becomes a creature. A huge mana cost, and this might not be the best card to represent the mechanic, but I'm sure there will a card when the rest of this set is spoiled that could find it's way into a little archetype in standard. Just like Kiln Fiend. 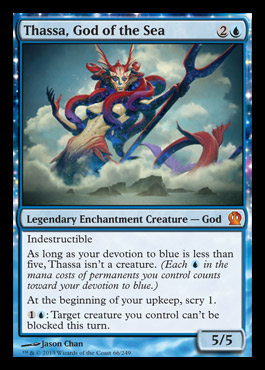 Now this is my kind of card!

3-cost 5/5 indestructible that let's you scry 1 each upkeep. Pretty strong if you ask me. It's drawback is your "devotion to blue". An interesting mechanic but it seems like a huge hassle in a multiplayer format. Not necessarily this card, but I could imagine a card that was like "Each player loses X minus Y life, where X is the cost of the spell, and Y is the devotion to black for each opponent." I really hope a card like that doesn't exist, just unnecessary counting. Nonetheless it's a good mechanic, I just hope it doesn't come down to a rules/time consuming thing. Like banding. 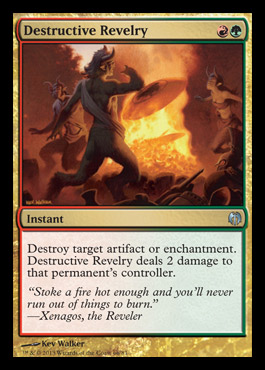 Simple and straight to the point.

It's Naturalize and a situational Shock on the same card for more color intensity. What's not to like?

Stay tuned for next week where we reveal more and more mechanics and post our thought on them.
Posted by Sefah at 12:47 PM