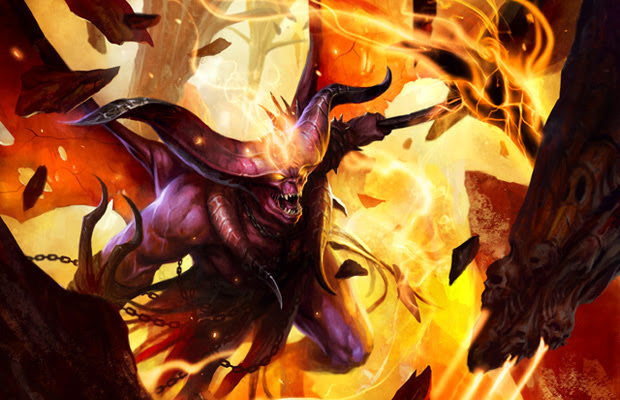 So...anyone who follows us on twitter (@SnoCoveredSwamp) or at least me personally (@Lolzor_SCS) should know that I said I was quitting standard...I lied. Basically I saw my friend playing a sweet Rakdos deck and I made a similar version of it and now I'm back in this. I figured for this weeks article I'd talk about it.

The deck is simple Removal + Removal + Removal + 2 Good Creatures = Win. The 2 good creatures being Desecration Demon and Stormbreath Dragon. Basically Demon is sweet since its  6/6 for 4 and its "downside" is more board control, and Stormbreath is just the Thundermaw of this set in the sense that it is an efficient haster that brings in the win. The deck also runs 4 Mutavaults and 3 Rakdos Keyrunes so you can also run the ping war while you control the game.

The strength of this deck is it's very adaptive which is a blessing and a curse. A casual player wont know what's being run in his or her store or probably what even that popular, but a more experienced play knows what to have main decked and what to have sideboarded each week. Again the strength is that the core is just the idea of 2 biggies and removal so you just fit the removal needed for that week in and bam top 8 deck.

Other versions of this deck run Chandra for the control match up among other things...I couldn't get my hands on any so I sub'd in 2 Rakdos Returns mainboard to basically add some hand control (That and that card is just insane right now).

Over all i have been pulling out mainly 3-1 with the deck due to my poor sideboarding or greedy play. The deck is simple but careful but I am having a great time with it.

That's all for today see you guys on Sunday for SCSLive! over at www.twitch.tv/snowcoveredswamp
Posted by Lolzor at 8:43 PM