So as you know I was streaming with Tate's Gaming this weekend and during that time we had some good times in the chat some of which involved making card's around some of the things said so I present to you the Tabletop Day creations! - Lolzor 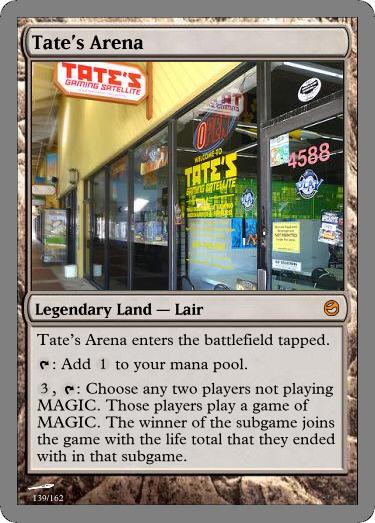 Tate's Arena - 0
Legendary Land - Lair
Tate’s Arena enters the battlefield tapped.
{T}: Add 1 to your mana pool.
{3}, {T}: Choose any two players not playing MAGIC. Those players play a game of MAGIC. The winner of the subgame joins the game with the life total that they ended with in that subgame.

I love this card and would totally play it to harass anyone in store (if you didn't know Tate's is the name of the store)  At some point I called the featured match as taking place in the Tate's arena...I walked back to the chat only to find that in 20 seconds a legendary land was born. 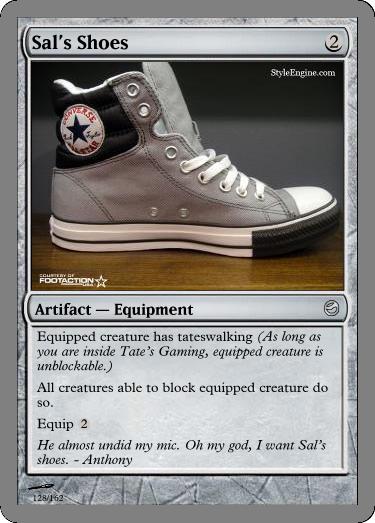 
During our down time I had some of the staff do a plug for the store to fill some dead air...what we got was a very flamboyant Anthony doing a pretty good spot of the comic book side of the store...alas his ADD got the best of him I suppose and Sal's shoes were just too much to resist and of course the chat was all over that too.


Thanks for joining us this week for an fully loaded day of articles. See you guys Wednesday for a return to more....normal (as normal as we get) content
Posted by Sefah at 1:55 PM