Well I dropped the ball again...this might as well be a Thursday article at this point but anyway before class I will give you this.

This past Saturday was Tabletop day and when I streamed you saw a lot of magic but there is so much more to tabletop gaming even for the most casual players so here are 3 I suggest you try out.

Honestly if you play any of the ones I write about make it this one. It's super simple. The game is basically a tribute and a parody of DnD or DnD like games. You start as a level 1 human and you win by reaching level 10. You gain levels by fighting a monster once a turn. The fun of this game comes from the fact that basically the whole point is to screw over your friends the whole time. you will get armor and weapons and races and classes...and you will get curses to take away any of that from your friends or just straight up get rid of a level. It's a ton of fun its only like 25 dollars and most gaming stores have a trial copy you can play before you buy it...its for any level of gamer...even an Uno player can get a handle on this game. 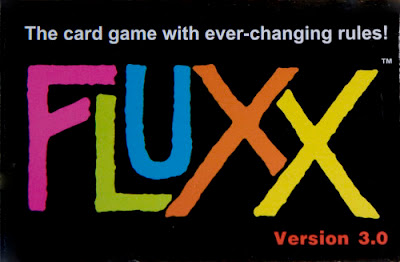 Fluxx is another great casual game. Its a card game...and thats about as far as it goes with consistency. You see the game starts with the rule draw 1 play 1. So you have a hand of 3 cards and at your turn you draw a card and play a card. There is no way to win till someone plays a card give you an objective. There are 4 cards in the basic version: Action: Let's you do something like draw more cards or steal a card, Goal: Gives you an objective for the game usually having specific Keeper cards, Keepers: Cards you put down in front of you that basically are how you win, and Rule: Rules change how you play either something simple like how many cards you have to play  or something silly like make a funny noise when you draw. It's a ton of fun and is never the same game, and on top of it there are other versions that can be played with or by themselves... all with themes like Star Fluxx with is all sci-fi or zombie fluxx...which is zombies....

The final game is Settlers of Catan, another simple game. The way to win is to get 10 points you get points by owning areas if the board. Besides points owning certain area will get you resources to allow you to further expand. The big appeal of this game is trading between each other it more of a game of wits and strategy its very fun and gets even better while drunk <_<.

Alright guys thanks for reading see you in a few days!
Posted by Lolzor at 12:58 PM