The Meta in ARAM

The Meta in ARAM:

There are only only three roles in the Proving Grounds aka Howling Abyss aka "ARAM". To be blunt there is AP/AD/Tank. Other roles that are uncommon but exist in Summoner's Rift are Split-pusher, Jungler, Support. We can look at teamfights later, but this is more like the first half of something. But first let's take a look at why some of these roles in Classic doesn't exist in ARAM.

Split-pusher: There's only one lane. To an extent this exists but it more commonly known as a backdoor, such as a Shaco desperately trying to kill the Inhibitor/Nexus. You can't build for backdooring per se, but it exists more of an opportune moment.
Jungler: Doesn't exist because there's no jungle creeps. They are suppose to get objectives, create pressure, and alleviate pressure. The only objectives are towers/inhibitors, and the pressure created in a single lane is just by zoning.
Support: The support only exists in Summoner's Rift because of a lack of gold income. In a full team of 5, there's 3 lanes of minions, and one jungle. The support has to get by on natural gold regeneration, and typically has the most team oriented items (Shurelia's, Bulwark, Locket, etc.) Additionally they have powerful abilities that scale off level and not ratio. Not saying they don't scale well, but I'm saying they can do really well despite having no farm.

Rejuvenation Bead: 5hp5 (1hp1) for 180 gold vs HP potion: 150 hp for 35 gold
crossover point: 150 seconds, or 2 and half minutes. or approximately 13 minutes to make it's entire gold cost compared to 5 potions.
Each of these items has it's benefits, constant healing, builds into something later vs "burst" regeneration, early sustain. These will be needed to determine by your judgement of early game fights. 5 potions are better than rejuvenation bead against heavy poke teams where you won't make it to ~13 minutes without needing it. 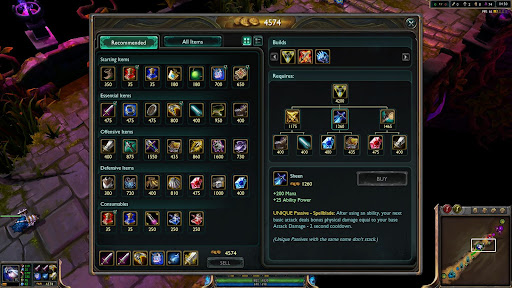 Starting items 90% of the time:
Unfortunately I come across a lot of people that don't know the "best" starting items. Effectively only ADCs and Tanks have the same starting items, and probably the same items every game.

If you are other "ranged" AD such as Kha'Zix, Jayce, Talon, etc. Consider other starts: Boots, 2xDorans, potions -or- Tear, Boots, potions -or- Brutalizer, potion

More than half the time though, if you are melee you are forced into being a...

Tank / Bruiser-forced-to-peel: Emblem of Valor, Doran's Shield, Rejuv bead, potions
reason: Boots aren't necessary for the first several minutes of ARAM for this role. It's a good item, but not necessary compared to what else you can get. Doran's Shield will mitigate a huge amount of damage from auto-attacks, since you should be in the front-line anyways. Rejuv bead is basically always a good buy, and potions because they are also always a good buy. Your first item should always be Aegis, always. Aegis only need about 2 people in it's aura (including yourself) to meet it's cost efficiency. With basically full 5-on-5 action the entire time, Aura items are extremely efficient, but Aegis/Bulwark is the best. Bulwark is worth rushing if they do magic damage, which is 95% of time. Your second item should probably be one of the Giant's Belt items (Warmog's, Frozen Mallet, Randuin's, Sunfire) There's not a whole lot of choice here, but as a Tank/peeler/intiator/has to do everything for the team, it is the most efficient and consistent way to win.

These are some of the results I have found after hundreds of ARAM games. I'm pretty tryhard when it comes to this game mode even though I really shouldn't be since there's typically a huge discrepancy in skill levels between teams. Feel free to experiment with builds but a lot of games come down to counting your pennies in items. Since gold income is basically equal between teams, it really matters to how efficient your build is. (Unless you just outplay them significantly.)

Thanks for reading, and sorry for not typing up an article last week. I could delve deeper and talk about how to teamfights, optimal mastery pages, and why you only take certain summoner spells, but that's for a different article.
Posted by Sefah at 1:12 PM