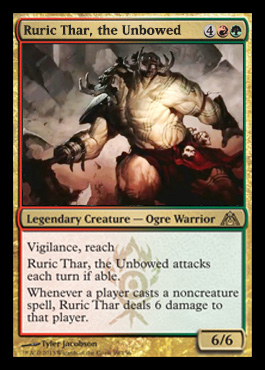 So this past weekend was PAX East and it looks like we got at least one card revealed from the new set, let's analyze it shall we?


Well then...that's a Gruul card if I ever saw one. Let's go top down. It's a 6 cost in G/R not out of the ordinary for Gruul/Jund/Naya, they tend to live in the mid range, good so far. Legendary Ogre...not really an important tribe and its legendary so no stacking effects and it's vulnerable to the legendary rule, no big deal though. Vigilance and reach...perfect I love these two effects together just makes a real beast if the P/T is right. He attacks each turn, this was kinda to be expected since he is an ogre but he isn't taping so it could be worse. That last ability is the winner here...this guy is a bomb no questions asked. Yes it does effect you as well but look at your colors if you are playing them right your utility comes on legs. And finally he is a 6/6.

So overall? He is gonna see play, a lot of play. This guy fits right in his slot 6 cost 6/6 with a great effect with the added bonus of vigilance and reach and he is not even mythic level. Yes he is a bit vulnerable but the whole of these colors tend to be, at least this guy will really punish some of those control decks, and if your are ahead the 6 to your face will probably be worth it if that Rancor you wanna cast late game is gonna win you the game. I almost see him working in the way Huntsmaster was played. Over all I wanted to give this a 3 or a 3.5 but it really is perfect flavor and it is well suited for the role of a 6 cost. This will win you games in both constructed and in limited, expect this to be seen next to your Reckoners in many decks. 4/5

That's it for today, thanks for reading and we will see you on Wednesday. Remember guys if you like what you see here don't forget to share with your friends and comment on our posts, we love to hear from you.

And as always email us at Lolzor@snowcoveredswamp.com.

Have a good week!