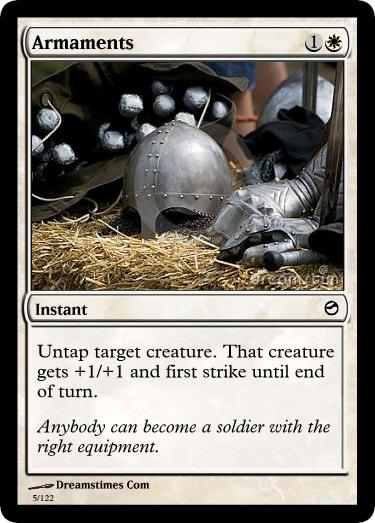 Armaments - 1W
Instant
Untap target creature. That creature gets +1/+1 and first strike until end of turn.

Well, I made this card a really long time ago, it's just I never got a chance to show it on MUCMonday. Basically I really liked the two cards Veteran's Reflexes and Seize the Initiative.

I "made" this card before M12 was printed, but now that Skillful Lunge is printed, I feel like this card is somewhat outdated. Possibly. The untap effect is a huge game changer. And is even moreso in Limited.

It's actually quite a ridiculous card, but it's still able to be responded to just like every other good card. 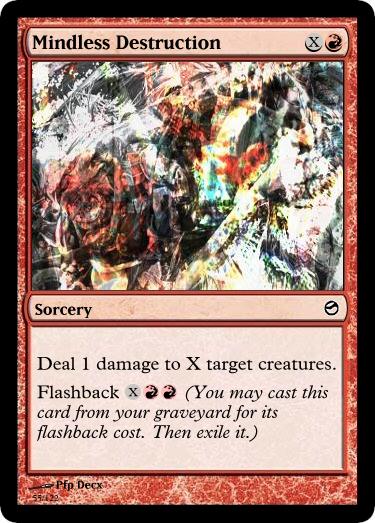 Lolzor had the idea for this card. It basically follows in suit about everything I said about Tremor in RCotD #98. This one however, is slightly unique.

First, it targets things, which is especially useful against illusions.
Second, it has flashback, making it slightly more useful.

It's still sorcery speed, and perhaps requiring a target could be a drawback, but it's still designed what it supposed to do: taking out 1/1's. And maybe even 2/2's if you have the mana.

But it's a pretty nifty common. But that's about all I could see it being. Maybe if it could target the same creature more than once or hit players too. But then it would be Fireball. 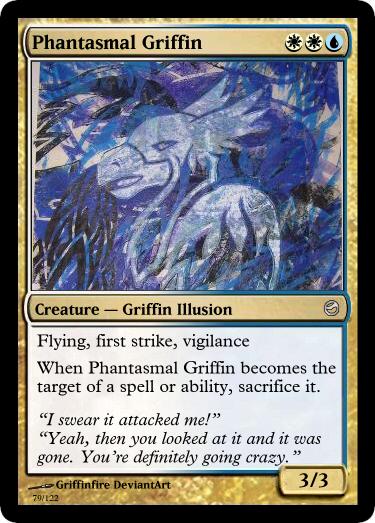 Speaking of illusions, why isn't there a massively color intensive one yet?

Why don't we have a 3-cost flying first-striking vigilance? Not everything is about power and toughness, it's mainly the keywords that make a creature ridiculous.

I think that's one of the problems the illusions decks have: they don't have any "deal with this or lose" cards. Just cheap aggro that dies to targeting. It doesn't really serve much of a difference as compared to say, goblins, which basically still dies to targeting so long as it's removal. But in standard, almost everything that targets is removal. So it's basically just aggro in blue. Call it a pet peeve but I still feel illusions are missing something. And I'm not talking about Lord of Unreal. 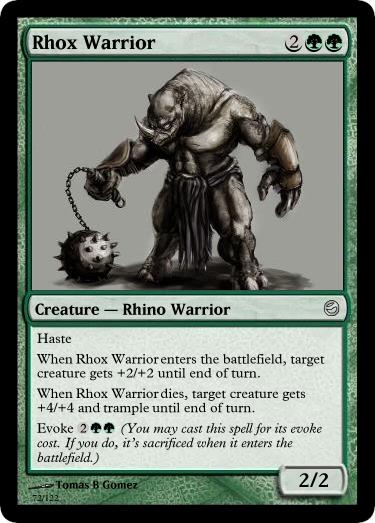 I'm sure all of you remember the evoke cycle that I'm trying to make. If you haven't seen them, you can go through the MUCMonday's archive and until you find them. (Maybe you'll see other cards you like too!)

Remember, the idea behind this card is it can be absurdly powerful, but because the "when cardname dies," effect is a must, it can really back fire on you.

So basically it's a 4-cost 4/4 haste. It loses it's value later on though. But now compare this to something like Might of Oaks. 4-cost +7/+7 is really damn good. But a 4-cost +6/+6 and trample could be even better. And it's on a creature so it allows you to have choices depending on the situation on the battlefield.

But if this is your only creature, and you swing for four, then your opponent plays a Strangleroot Geist and Doomblades your Rhox Warrior, you are now forced to give +4/+4 to your opponent's creature, even if it would harm you. So it allows both interesting plays for you and your opponents.

Well that's all the cards I'm sharing today. If you enjoyed these cards, please come back next week for our next MUCMonday, or swing by on Friday where I share the IPotW. Don't forget to tell your friends about us; and if you guys haven't seen it yet, check out Snow Covered Swamp's Webcomic: Bangchuckers!

Originally I had hoped we would have a debut on post #100, and be able to start posting regularly by RCotD #100, but azyzl takes pride in her work so it's taking a little longer than usual. Check out some of her other projects: A Celestial Story.
Posted by Sefah at 11:40 AM