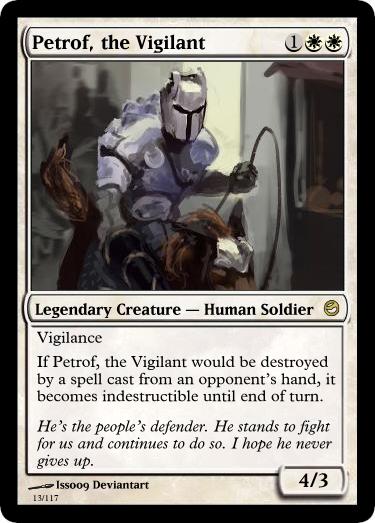 Okay, so Lolzor had the idea of something being an anti-Wrath of God card. The original wording was something like "if it would be a destroyed by a spell that doesn't target it" but it seemed too clunky and irrelevant most of the time. So now it's basically anti-removal. I mean it can still be bounced and still be exiled, but it deals with a lot of threats just by becoming indestructible if you want to kill it.

Originally I had him as a 3/3, but I felt like if he was printed as a 3/3 he would get shoved under the rug, I made him a 4/3 and now he seemed a bit too powerful, but all you have to do is play creatures kill him. You can still control him by bouncing or keeping him tapped down--so you can still deal with him, just not with the ol' fashioned Doom Blade. I probably should have bumped him to Mythic rarity. 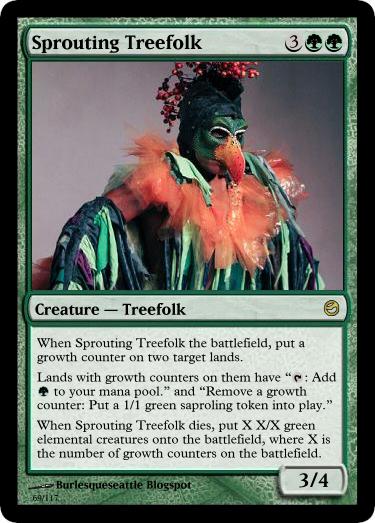 Behold! The green cycle of Sun Angel! At first he may not seem as strong as her, but quickly realize how fast it can get out of control if you play two of these. Three of these and it's a nightmare.

The counters can fix mana, and they can creature chumpblockers if need be. All you have to do is get your creature to die. It shouldn't seem hard, I mean he does have a large enough power to be a threat, and worse case scenario you can always sacrifice him if you play Altar's Reap, or Grim Backwoods. 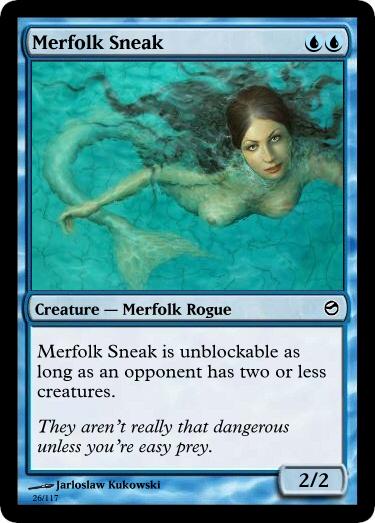 This is one of several cards that Lolzor designed. It's got an ability to make it seem ridiculous, but as long as you have creatures, it won't be able to slip by. It's also double blue to cast, so in drafts it might be pretty difficult to play. I didn't think it was strong enough to be deemed an uncommon but I definitely like the design of this card. 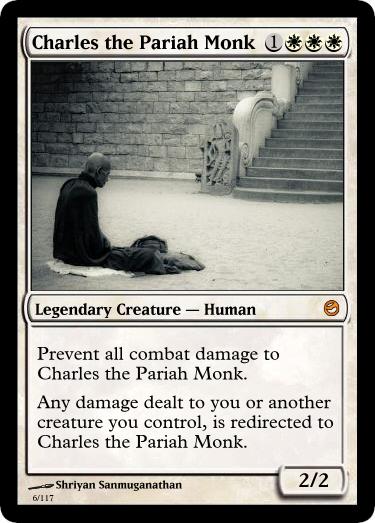 Okay so this is my take on Cho-Manno, Revolutionary. I always wanted to get Pariah on him but I was never able to do it. So I made Charles. I named him Charles because I honestly couldn't think of a better name for it. Besides, it gives it swag when you play it. It would be hilarious to hear players talk about him if he was ever printed.

"Oh man, he had me locked down and all I needed was my Red Sun, and then he played Charles. Sigh."


Well that's all the cards I'm sharing today. If you enjoyed them please come back next week for our next MUCMonday, or swing by on Friday where I should be able to finally finish typing out the IPotW. Don't forget to tell your friends about us; and if you guys haven't seen it yet, check out Snow Covered Swamp's Webcomic: Bangchuckers!
Posted by Sefah at 8:03 AM