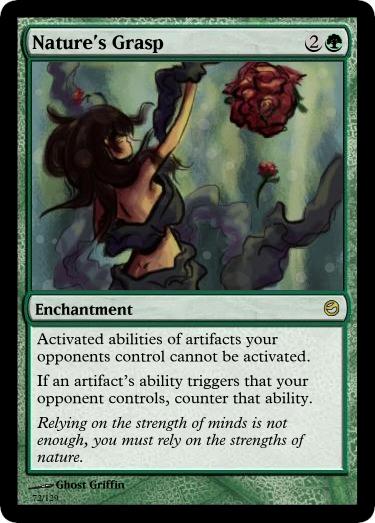 Nature's Grasp - 2G
Enchantment
Activated abilities of artifacts your opponents control cannot be activated.
If an artifact’s ability triggers that your opponent controls, counter that ability.

One of Lolzor's cards that he made. He kind of serves the same purpose of Chalice of the Void in legacy, but I feel he made this card because he is getting frustrated at artifact or enchantment lockdown.

(Crown of Empires and Norn's Annex to be specific.)

However the additional clause that stops triggered effects from artifact can be particularly useful against Sun Droplet decks among others. 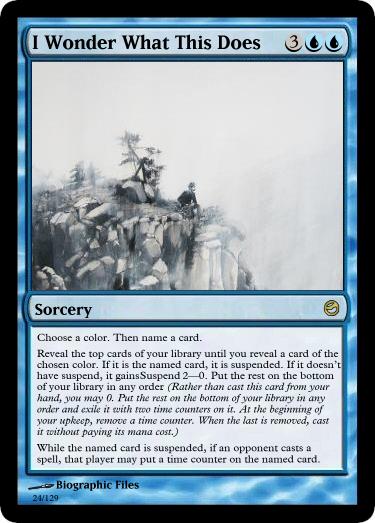 Alright. I'll just say it now: I like suspend cards. At first I was kind of iffy about whether they were good or not, but after playing several games with my Jhoira of the Ghitu EDH deck, I realized it's actually quite amazing.

So I decided to make a whacky card designed for duels. Because face  it, if somebody played this kind of card in multiplayer, it would almost never resolve.

The original wording on the card was "While the named card is suspended, if an opponent casts a spell, that player may proliferate." Then I realized that proliferate only hit permanents, not exiled and suspended cards, so I had to re-word it. 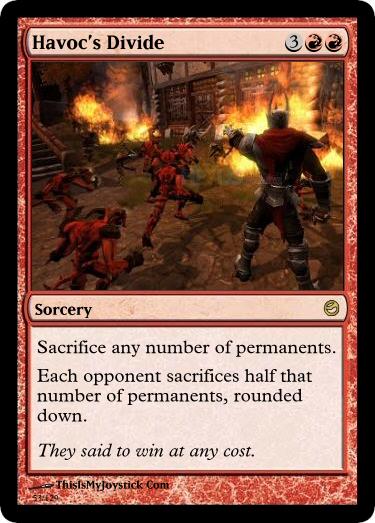 Another card that Lolzor had an idea for. I forgot how it came to, but one of us said "Havoc's Divide" and we thought it was a Magic card, because it sounded like the name of one. We were both wrong and it actually didn't exist, so we made this card top-down from the name only.

That said, I really, really like this card. It has so much of that chaos flavor that red is supposed to have without too much random chaos bullshit like Chaos Lord or Scrambleverse.

One of the concerns when making this card was token abusability. I had considered making it "Sacrifice any number of nontoken permanents." to thwart that, but then I realized that's exactly the kind of abusability you would want in a card.

Also if you're ever losing in multiplayer and want to go out with a bang, this would be the card to say "I'm doing something big before I concede."

Additionally, because sacrificing is part of it's effect, and not it's cost, you won't get completely screwed over if somebody countered your spell. 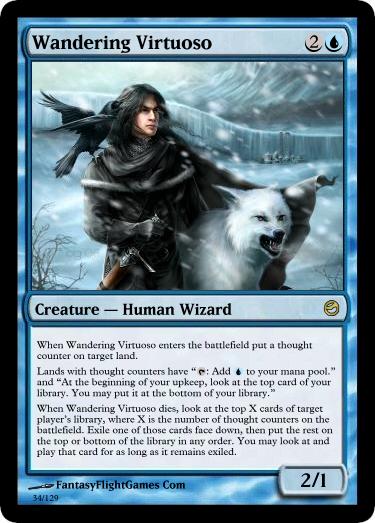 Wandering Virtuoso - 2U
Creature - Human Wizard
When Wandering Virtuoso enters the battlefield put a thought counter on target land.
Lands with thought counters have "{T}: Add {U} to your mana pool." and "At the beginning of your upkeep, look at the top card of your library. You may put it at the bottom of your library."
When Wandering Virtuoso dies, look at the top X cards of target player’s library, where X is the number of thought counters on the battlefield. Exile one of those cards face down, then put the rest on the top or bottom of the library in any order. You may look at and play that card for as long as it remains exiled.
2/1

The blue creature cycle of Sun Angel/Sprouting Treefolk. If you wanted to see the enchantment cycle, so far I only have Obelisk of Nihil. So if you guys want to see what the red counters do, you'll just have to sit tight for a little bit.

The blue counters were actually pretty difficult to design. I wanted it to have an obvious win condition, without it being ridiculous. So in case you are unfamiliar with the counter-cycle, here's the run down.

The creature/enchantment gives counters to lands, whether on your own or your opponent's lands.
The lands effectively becomes a dual-lands.
The counter gives the land an ability. (Sometimes it's passive, other times it's an activated ability.)
When the creature dies, it does something based off the number of counters of it's type.

So the first run down of the blue creature was:
2 counters
tap for blue
remove a counter, fateseal 2.
when it dies target player mills twice the number of X

But if this was a rare? It would have easily been forgotten. Not to mention milling is a weak win condition anyways. Even if you got 4 of these out and then Day of Judgement hit, you would only mill 32 cards. So the second time I made the blue counters I changed it:
1 counter
tap for blue
remove a counter, scry 1 or fateseal 1
when it dies target player mills X, and you draw X.

Now this is about where it should be. Now you can control your own draws, and when it dies you can draw some cards if you have a couple. But now there's basically no incentive at all for removing counters. You literally just want your creature to die. I didn't like that on the creature so I was retarded and made it even more stupid:
2 counters
tap for blue
remove a counter, scry 1 or fateseal 1
when it dies target player mills twice X, and target player draws # of cards went into the graveyard this turn.

I'm not sure what I was thinking when I did that. Literally it was a "please kill me" card and didn't do anything to change the game. It still didn't solve the original problem of removing counters when in dire need, and the number of cards went into the graveyard this turn would be: whatever killed it, the card itself, and the number of cards milled. So you would draw 6 cards everytime this thing died. That isn't what you would want in a card. I mean it's powerful, but it really doesn't solve the original problem, and now it's just a counterpart to Brain Freeze.

So then I made the final version of this card. Which is what it is now. The land abilities stack, so it's basically: "Scry 1, then Scry 1." which is completely different then "Scry 2." And now that the counters give a passive ability, there's none of that "should I remove the counter now or wait until it dies?" kind of deal. And instead of drawing X cards, it's effectively "Scry X, put one into your hand." but you can do it on your opponent's library too! This makes the card very exciting, at least for me since you can now play your opponent's spells (assuming you can pay the colored mana) or maybe even exile the card you didn't want them to have. And when he dies you fateseal them if you have enough counters! (Fateseal has won a lot of games for me.)
Posted by Sefah at 11:32 AM