This week is as actually all of Lolzor's cards. He went crazy one day and sent me a bunch of ideas that needed some tweaking, but mostly needed re-wording--or balancing issues. Remember, these enchantments affect both players, which is why their cost is so low for their power.

Either way, read the cards and judge them for yourselves: 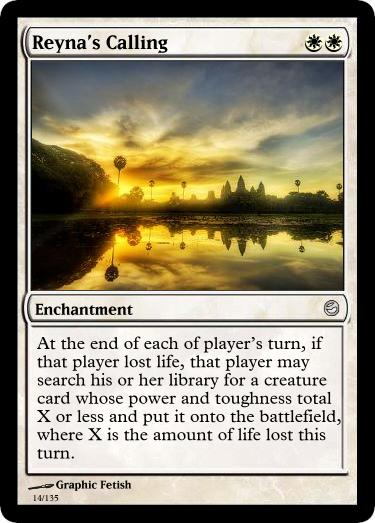 Reyna's Calling - WW
Enchantment
At the end of each of player’s turn if that player lost life, that player may search his or her library for a creature card whose power and toughness total X or less and put it onto the battlefield, where X is the amount of life lost this turn.

So I suggested making it a fetch card, but with a really strict fetch on it. 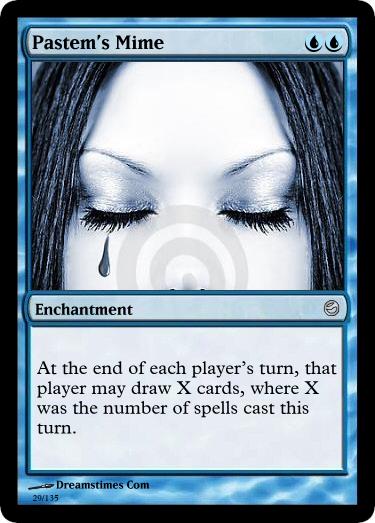 Pastem's Mime - UU
Enchantment
At the end of each player’s turn that player may draw X cards where X was the number of spells cast this turn.

This one was the second of Lolzor's cards he made. He wanted a cycle of uncommon enchantments that affected both players. So while it is a blue card in drawing, it deters counterspells. (Your opponent plays a spell, you counter it--but he draws two cards.)

So it actually seems like it would benefit fast decks, but the double blue somewhat deters it. Would be amazing in aggro or burn decks as it turns everything into a delayed cantrip. 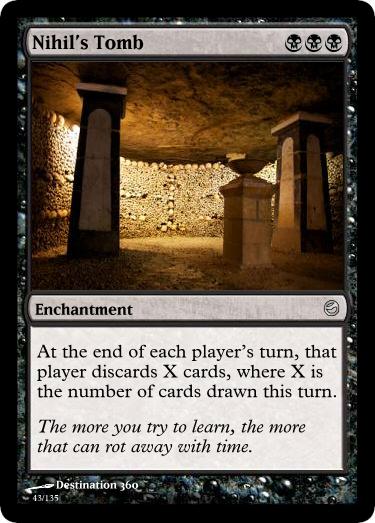 Nihil's Tomb - BBB
At the end of each players turn, that player discards X cards where X is the number of cards drawn this turn.

The card that does topdecking-from-hell. Lolzor originally wanted it to be done during your draw step, but I told him it would prevent any and all sorcery spells that would deal with it. Mainly affecting creatures. It does put an end to control decks quite nicely well. Just make sure you don't Brainstorm on your own turn when this is on the field.

Lolzor Edit: The wording on the card is supposed to be "At the end of each players turn, that player discards X cards where X is the number of cards they drew this turn." 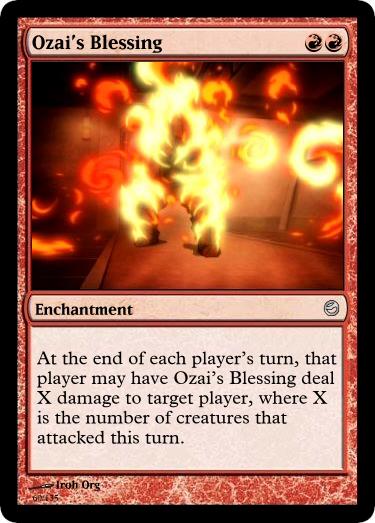 Ozai's Blessing - RR
Enchantment
At the end of each player's turn, that player may have Ozai’s Blessing deal X damage to target player, where X is the number of creatures that attacked this turn.

In a sense this card is like Raid Bombardment, but less splashable and it can also affect you pretty hard if your opponent is also playing aggro. It could make for some interesting match ups though. 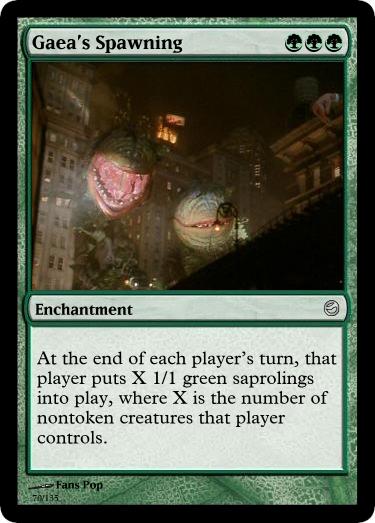 Gaea's Spawning - GGG
Enchantment
At the end of each player’s turn, that player puts X 1/1 green saprolings into play where X is the number of nontoken creatures that player controls.

Lolzor actually remembered the "nontoken" creature part of this when pitching the idea. A really strong card, especially when combo'd with other cards, but yet still vulnerable to Wrath of God and other cards like it.

Once again, be careful about this card because your opponent will be spawning saprolings, too.


Well that's all I'm sharing for today. I usually only post 4 cards a week from the set we are making, but this week is extra special because it seemed out of place if we didn't post the entire cycle of these cards. We will probably drop back down to 4 cards a week, so consider this a special treat.

Also if you haven't seen it, check out our webcomic Bangchuckers! as we just posted our 2nd comic. It's becoming increasing popular based off our stats page, but we hope you guys like it. More to come soon!
Posted by Sefah at 7:22 PM