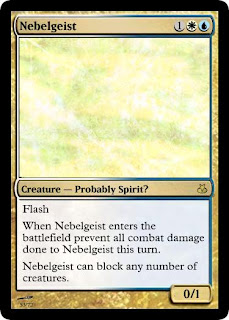 It is important to note that Nebelgeist is actually unconfirmed. It's just a rumor. It might not even be a rare. Faithless Looting doesn't seem to be rare status, despite it showing that.

The other two cards "spoiled" are: (names only, sorry)
Gravecrawler
Ravenous Demon

Gravecrawler is most certainly going to be a zombie. Judging completely based off of it's name and nothing else, you will probably be able to cast it from your graveyard. Kind of like Skaab Ruinator. Maybe it'll be blue, too. They are trying to make Zombie Blue/Black and somewhat milly, as evident with Zombie Alchemist, Armored Skaab, and Stitched Drake. That's about all there is to speculate.

Ravenous Demon will probably be black, and not likely splashable based off Reaper from the Abyss. So far, every Magic card that has started with Ravenous either has an enter the battlefield effect, or has something happen during upkeep/end step. (Excluding Ravenous Baloth) I'm hoping for a Demon synergy. Black/Red is Vampires, Black/Blue is Zombies, so why not have Black/Black Demons? It would kind of fit the theme of Innistrad block. I'll take a shot in the dark and say there's a Demon Lord in this set, maybe not Ravenous Demon, I'll try to make up a card for it.

Lord of Demons - 4BBB
Flying
During your upkeep, if you control a Demon other than Lord of Demons, you may destroy target non-Demon creature.

If I wanted it to be over-the-top (maybe it should be) you could add "Morbid--2BB: Reveal the top card of your library, if it is a Demon card, you may play it without paying it's mana cost."

It probably won't happen, but one can wish.
Posted by Sefah at 4:49 PM