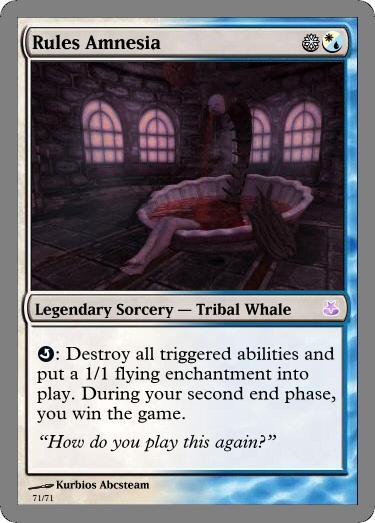 Hello readers (or lurkers) and welcome to the newest thing I thought of: Making up a card. It's not exactly a ground breaking idea but it is always nice to see what other peoples cards and thoughts are.

The card to the left is not actually the card I was thinking of. That's more of a joke. I always think of a card idea and send it Lolzor. Sometimes I don't exactly think the card through and it ends up being insanely overpowered. (You have to be careful of this.) But other times I want the card to fill a specific niche, or just throw a cantrip on it. 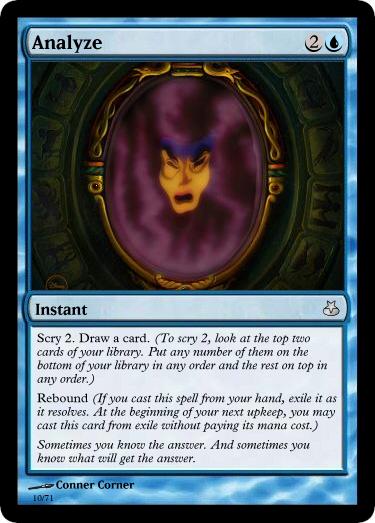 At first when I thought of this card, I was like "Yeah!" It's basically a Preordain with a little more draw to it. It's pretty expensive but that is sort of circumvented by it's rebound. A card that gets the answer to your opponent. It's not exactly an early game card but is much more useful when the game is being dragged out. But now I'm comparing it to Foresee. I'm realizing that this card would be replacing it. It costs less, it almost scries for the same amount. (Scry 2 + Scry 2 =/= Scry 4) That's not exactly the kind of card I would want to make. If I was R&D I wouldn't allow this card to be printed for a long time. The power creep is just not right at the moment for this card. Maybe if you changed Rebound to Flashback 2U it could be better, that way you don't get the drawing a card for free, but still a good card. But, then it would make Think Twice obsolete--almost. Oh well enough about this card.

The other card I'm going to discuss is actually my dog. Yes. I made my dog a card. I think it captures the flavor of her quite well: 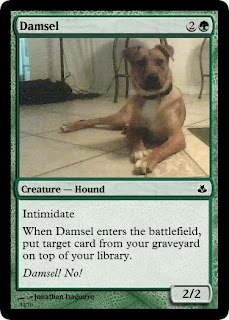 Damsel - 2G
Creature - Hound
Intimidate
When Damsel enters the battlefield, put target card from your graveyard on top of your library.
2/2

It's got a powerful Regrowth-esque kind of effect going on. But it doesn't go into your hand so it's not over-the-top good. Besides that, you are paying 2G for a 2/2 Intimidate. Which is about average for splashing--I mean you can get Spectral Rider for WW, so the extra mana makes the second effect almost worth it. Actually it makes it almost completely worth it. It could be especially good mid-game when you need to recur specific spells. I probably should have bumped it up to uncommon at least.

Anyways thanks for reading! Come back next Monday for another card, Friday for great plays, or just every day to see a random card where we talk about how good (or how bad) a card is!
Posted by Sefah at 3:40 PM