Either way, you can read the cards and judge them for yourselves. This week I decided to deviate from my normal commons/uncommons with nifty tricks and decided to make a couple of rares. 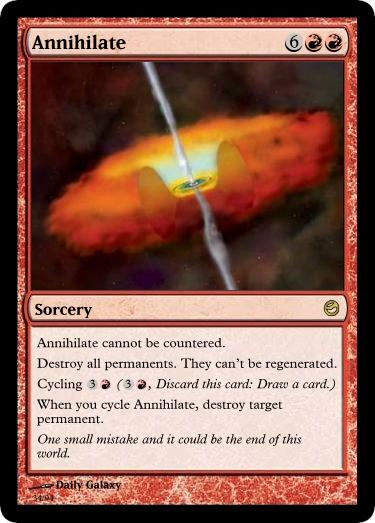 Flat out, I'll admit this card is amazing. You probably will never hardcast it. It's also slightly out of flavor because red is not supposed to have ways to deal with enchantments, especially uncounterable 3R cantrips. Just because of that it is amazing. To make matters worse, cycling is an ability, meaning it can't be Counterspell'd. And even if you hardcast it, the only ways to deal with it are Time Stop and Mindbreak Trap. 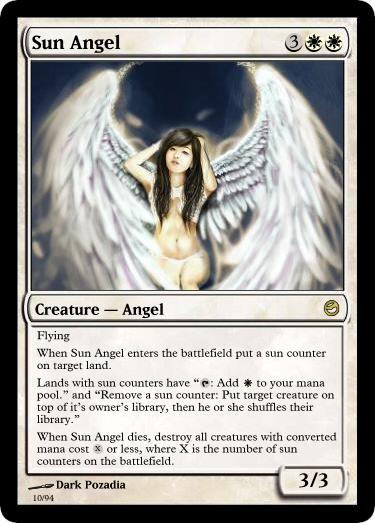 That's a lot of text. You may have to read it twice. It's a 5 cost 3/3 flier that when it dies, destroys tokens and cmc 1's. You can also bounce the creature to a library and shuffle it, so when the Angel dies, it will still kill all the tokens. Additionally, the sun counter can be a sort of mana fixer giving one of your basic lands the property to generate two kinds of mana--a mana fixer of sorts. And if you are playing four of these, things can get pretty ugly.

This is a cycle I've sort of been working on. I would like to make one for each color, but it's difficult to balance them with each other. At least this one I've gotten the power level where I wanted it to be--then again it may have to be Mythic quality because of it's many uses. I've also been working on another cycle of cards but you guys will just have to wait until next Monday for it. Evil, I know. 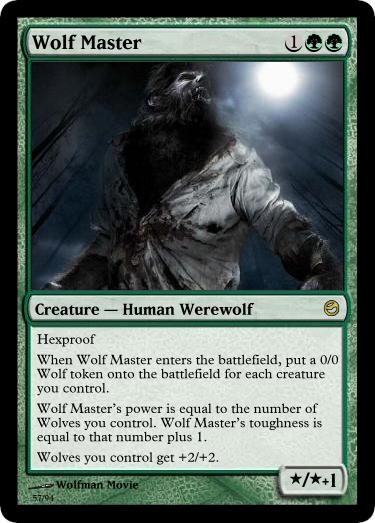 This is the card Lolzor wanted to make. Both me and Lolzor agree, Hexproof belongs in green. We've had a few debates over why Invisible Stalker and Geist of Saint Traft are issues, in both limited and constructed. Blue deserves shroud--giving hexproof to blue is a mistake especially so swords can go on unblockables. CAWBlade would have a field day with Invisible Stalker.

This card is a very "rolling stone" card. Suppose you have Darkthicket Wolf, and an Acidic Slime. You play this card you now have a 4/5 hexproof that brings in three more wolves. It is important to note that the wolves don't have hexproof so it actually gives a chance to "deal" with the card, not to mention three 2/2's for 1GG is way above the mana curve.

And don't worry about the wolves being 0/0's, because the "wolves get +2/+2" is a static ability, the wolves will be a 2/2 and the ability triggers when he enters the battlefield so who he will be there to give the bonus. (It would be different if it was an on cast effect.) The notable exception is Darkthicket Wolf, who will be a 4/4. However, like all hexproof cards it hurts from a Wrath of God effect, but at least this can keep up the pressure with spot removal cards that are ever so prevalent in U/B control.

Well that's all I'm going to share with you guys this week. Come back next Monday for more cards we make up, Fridays for Interesting Plays or everyday for a random card that actually exists where we talk about how good (or how bad) the card is.

And yes, I did change the logo of my made-up set. A star over a circle was too bland, albeit it was better than the default square.
Posted by Sefah at 2:30 AM