This week I will actually be posting a bunch of joke cards. And by joke I mean some of them would work in a game so they are black bordered and others just flat out don't work, or are too easily broken. But at least the concept of the card is still there. 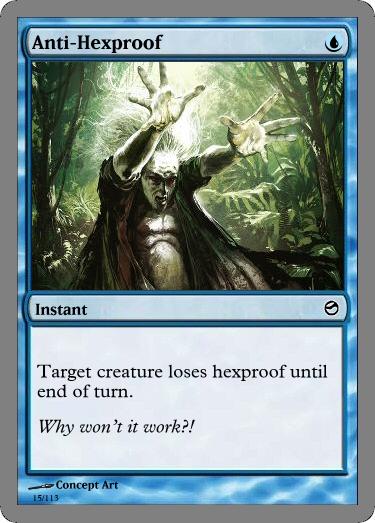 Lolzor made this card because he knows how much I hate hexproof. That's basically it. It doesn't work, and it's useless. But that's the joke. 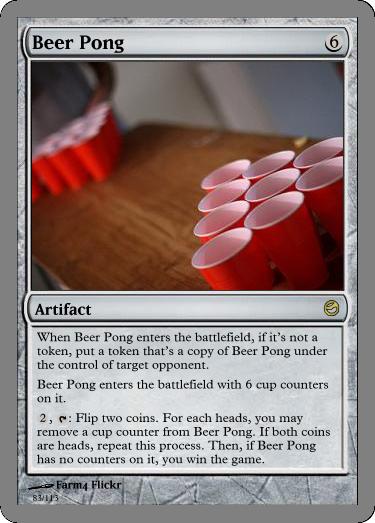 Okay so this one is kind of close to becoming a real card--with the exception of it's low activation cost. It's a silver-bordered card because I could easily see this broken with cards like Hex Parasite or Vampire Hexmage. But more importantly it doesn't fit into any of the lore of Magic the Gathering, so that's why it has a silver border.

I also considered making it a legendary artifact with a "The legend rule doesn't apply if there are exactly two permanents named Beer Pong on the battlefield." Kind of like Brothers Yamazaki. But if your opponent plays Copy Artifact on this, by all means he can copy it. Especially in multiplayer. 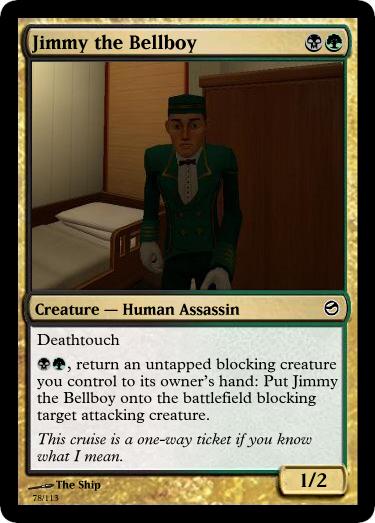 Okay, so his ability is like the opposite of Ninjutsu. This card was designed while I was playing The Ship--a game. The plot is you're stuck on a cruiseline. Each person on the cruiseline has a designated victim. All you have is the name, so you have to interact with everyone until you find them, and then strike at the right time while getting close to them; and unbeknownst to you, other people on the cruiseline have been given names as well. One of them is yours.

Very early on in the game there is a character called Jimmy the Bellboy who is so incredibly helpful to you and tries his sincerest to get you out of here alive. I haven't finished playing the game but I'm fairly certain that the same guy who is trying to help you is actually your killer. Thus, Jimmy the Bellboy is an assassin that comes in at any point in time and can kill you through combat damage.

He could also be a legendary creature, but I wouldn't increase his rarity for that. Also there should be a lot of bellboys on a cruise line, so you can have four out at a time. 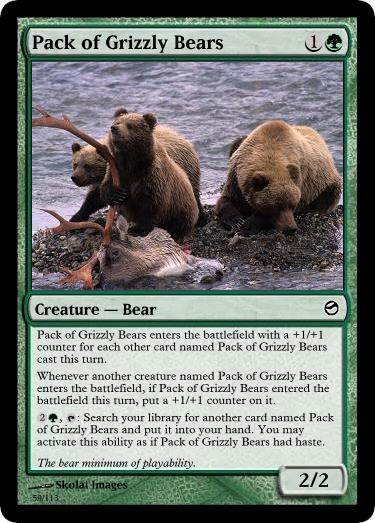 This one actually took me a while to get the effects down right. When Lolzor first got into Magic, I handed him a bunch of my bulk cards; and after looking through them he made a green/black deck. One of his favorite cards was Grizzly Bears because well, it was an easy two-drop and it didn't die to Prodigal Pyromancer. So when he started playing, one of the jokes was that if they were cast on the same turn, they were 3/3's instead of 2/2's.

The additional clause for searching for more is pretty expensive, but it adds something to the card kind of like Squadron Hawk. For 1G you get a 2/2, for 4GGG you get two 3/3's, one of which is tapped. For 7GGGGG You can get three 4/4's, two of which are tapped. And if for some reason you are sitting on 18 mana, you can get one untapped 5/5 and three more tapped. It is a lot more intricate than a common should be, but it still has the power level in respect to its mana cost as a common.

Well thanks for reading our MUCMonday; come back daily for our random cards and Friday's for interesting plays!
Posted by Sefah at 11:28 AM