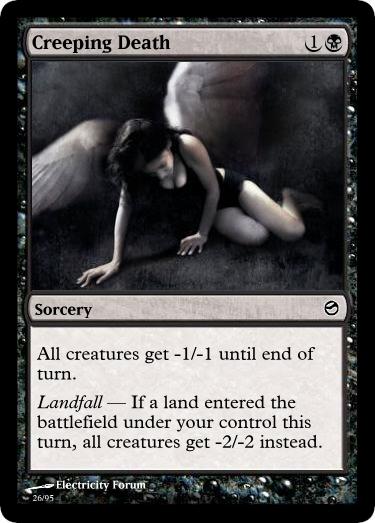 This is my take on fixing the outdated Nausea. It's a very cheap effect for something powerful but won't kill any fatties. (Though it could help if you cast it in your second main phase.) But now it can be more powerful with a conditional Landfall. Nausea already took care of swarm decks pretty easily, this one raises the bar for a slight power creep, but doesn't have the -1/-1 counters or shuffle effects like Black Sun's Zenith. 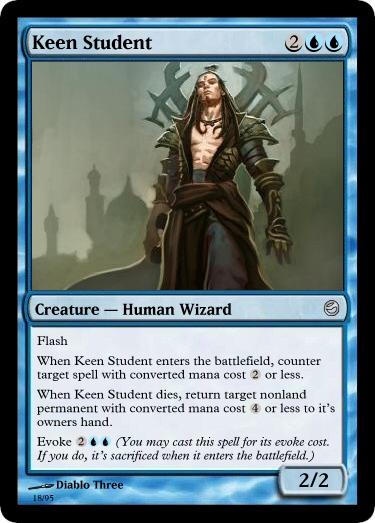 It's basically a cheaper Lost in the Mist but its got more restrictions on it for what it can counter and bounce.

This is one of the cycles I mentioned about last week. The idea is to have a cycle of uncommons that fit the flavor of each color with an enter the battlefield effect of 2 and a leave the battlefield effect of 4. It's evoke cost will be 2 colored mana and 2 generic mana for 4 converted mana cost. They will all be 2/2's. You can judge this card for yourself but I think it is an amazing card--especially at uncommon. The evoke is just icing on the cake if you need both effects at the right time. This card will be more relevant than you could think. 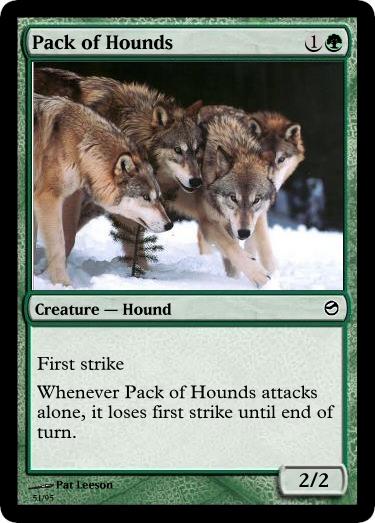 Isn't it funny how we love to make Grizzly Bears obsolete? This card was actually made up between me and Lolzor over a discussion on who would get first strike in all scenarios, using only creature types.

Basically equipment would always give first strike, especially when equipped to a human. Afterwards, we had a debate over Hounds vs. Birds. Hounds are quick to move, especially when hunting, but birds swoop down from the sky at violent velocities. One thing led to another and we ended up making this card. It's got first strike when defending, which is important, but it has it conditionally when attacking.

And one more thing: if you swing with two creatures and your opponent kills one, it keeps the first strike since it didn't attack alone, it is attacking alone--meaning it only triggers like Exalted.

Well I hope you guys liked our cards this week. Come back next week for more cards or everyday for random real cards!
Posted by Sefah at 12:21 PM