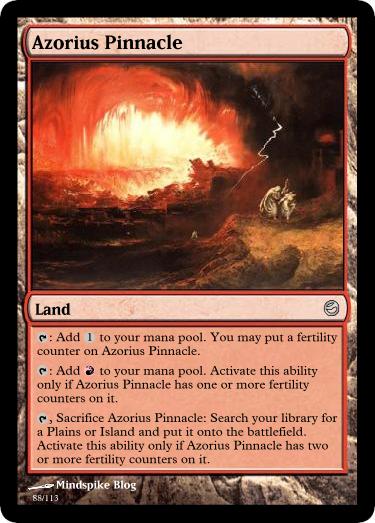 This was the land cycle I thought of. I won't bother posting all the other because they function identically. Each one taps for a respective color and their two enemy colors basic lands (which is where the guild name comes in) for its sacrifice effect. This idea was taken from the Shard's cycle of Panoramas because I am kind of expecting a Scars of Alara soon, featuring 5 new shards consisting of enemy colors instead of allied colors.

It comes into play tapped but it takes time for it to be useful. On turn one, you can tap it immediately (since there is no mana burn any more) and it functions identically as a mountain. It begins to lose its value later in the game but it still thins out your deck and could possibly get you the land you need in a different color since it enters untapped. Maybe the fertility counters on its third effect should be three or more counters but it's still a very nice mana fixer, and shouldn't be too expensive if it was ever printed. 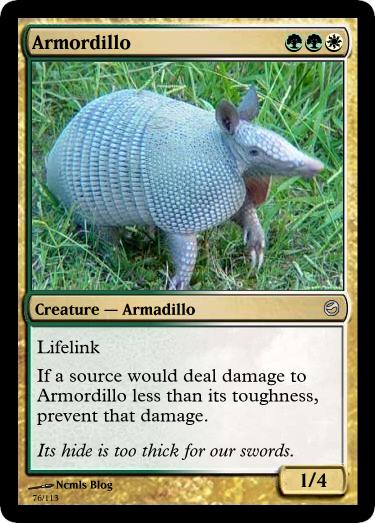 Armordillo - GGW
Creature - Armadillo
Lifelink
If a source would deal damage to Armordillo less than its toughness, prevent that damage.
1/4

For this I wanted to make a defender-esque creature without it actually having defender. Kind of like Kraken Hatchling does, but it can still attack if you manage to equip it well.

Attaching lifelink to this might have been too much with its second effect but it needed something to deter attacking. 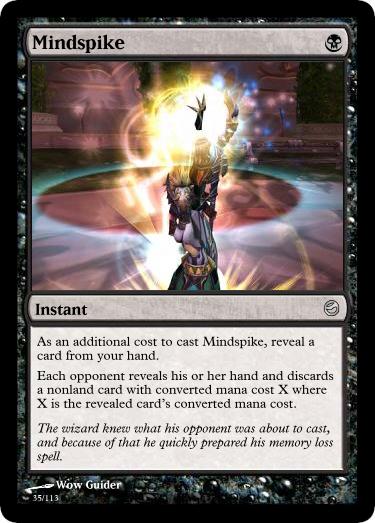 Mindspike - B
Instant
As an additional cost to cast Mindspike, reveal a card from your hand.
Each opponent reveals his or her hand and discards a nonland card with converted mana cost X where X is the revealed card’s converted mana cost.

This is one of the cards that Lolzor made. He wanted a cheap discard effect that would work in multiplayer, but he also wanted it to be an instant. The inspiration for this card was Induce Despair where the additional cost was revealing.

There were two problems with this card, the first being a cheap discard effect. Many of the cheap discards have you discard nonland cards. It is too punishing for you to discard a land especially on turn one. The original wording on the card didn't say nonland, but it could be the start of a real bad game if you drop a swamp, play this and reveal a land, which has a converted mana cost of zero, and force your opponent to lose a land.

The second problem was a discard effect being an instant. Instant speed discard in general is a bad idea because you can stop your opponent on his draw step and have them discard their hand. Pretty punishing if they are in topdeck mode. However, this card circum vents that and rewards its controller but "guessing" the cards converted mana cost correctly. 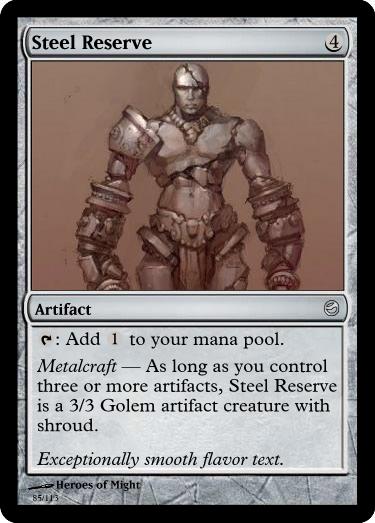 Steel Reserve
Artifact
{T}: Add {1} to your mana pool.
Metalcraft — As long as you control three or more artifacts, Steel Reserve is a 3/3 Golem artifact creature with shroud.

Another card that Lolzor made. He made this card after a conversation that stemmed between our debate on the spoiled Dark Ascension card: *SPOILER ALERT* Warden of the Wall. I didn't like it because it doesn't win games because it can't swing. It's also turned into a creature on the wrong turn(s) so it can be removed as well. I compared it Glint Hawk Idol, because they function similarly, with the exception of the mana.

The shroud on the Golem I believe was necessary. It's always a creature as long as you have metalcraft so it can still be hit by Wrath of God effects, but now your unused mana is a little safer. Maybe you can even dodge the wrath if you can turn off metalcraft with Phyrexia's Core.

I seriously doubt anyone reading this really cares for accidental spoilers on Dark Ascension because to be honest, if you play Magic you are probably checking on the spoilers daily. I should be writing an article on that soon, because most of my guesses have been correct, especially with Gravecrawler.

Well thanks for reading our MUCMonday; come back daily for our random cards and Friday's for interesting plays!
Posted by Sefah at 1:22 AM